“Momentarily Distracted” Behind the Scenes Part 2

As I mentioned in Part 1 of this blog, I released an EP back in October, but was too busy preparing for and experiencing the birth of my first child to post about the making of the album.

I had a lot of emotional baggage I wanted to dump before I needed to be a rock for this helpless little bundle, and I really feel that producing this CD was effective in doing that. I previously blogged about some of the CD’s darker content, but never got around to explaining some of the behind-the-scenes work that went into making the CD.

When it came to the album art, I decided that I wanted to make it myself. I was once very active with sketching and doodling and I liked to paint once in a while. It has been a while though, and I was unsure of what I was going to be able to accomplish. I had a vision, but could I pull it off? I think I did! 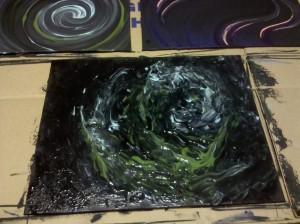 Wet canvases. I actually had five paintings to choose from. The one on the upper right did not make the cut.

I needed four images: the cover, the inside cover, the back cover and the CD itself. The image featured in the photo above was used for the back cover. The front cover ended up being an experimental mixed-media piece. I like how it came out. 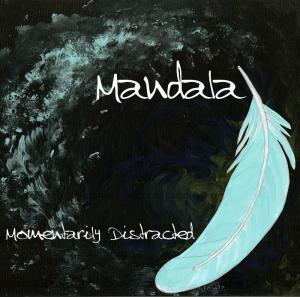 If you would like to listen to some of this new music, I have clips of  two of the songs: “Momentarily Distracted” and “Wrong” on my website. If you like what you hear, visit the site’s store and pick up the full EP! 🙂